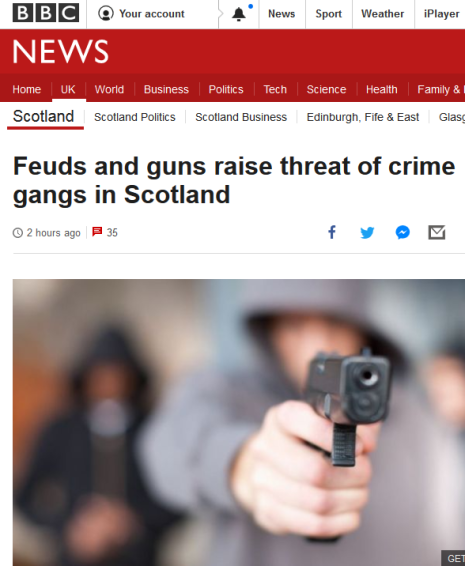 We recently watched as BBC Scotland attempted to scare its audience by trying to spread England’s knife crime crisis to Scotland as part of their wider campaign to question the notion that Scotland is becoming a bit different from England, even, dare I say, a better place. See this:

BBC News tries to spread knife crime crisis into Scotland to tell us: ‘You’re no different. Don’t get any ideas!’

Today, they had another go and, this morning at 06:00 am but repeated five or six more times, before 09:00 am, BBC Salford opened with:

and reported that there are more than 4 500 gangs involved. The figures from the National Crime Agency (NCA) are presumably UK-wide figures.

Clearly not to be left out, BBC Scotland, at 06:26 and repeated five or six more times before 09:00 am, headlined:

‘Feuds and rivalries between organised crime gangs in the Central Belt pose an increasing threat to the public.’

and reported that there are more than 160 crime gangs here.

The BBC Scotland website repeated and extended the story:

‘Feuds and guns raise threat of crime gangs in Scotland. “Ongoing feuds, violence and firearms” in the central belt are increasing the threat posed by crime gangs, according to a report. An assessment of organised crime by the NCA has found the number of criminals involved is falling Police warned that despite increased activity in the central belt and recent firearms seizures, these groups still have ready access to such weapons and some are prepared to use them in public.’

So, first, contrary to the BBC Scotland broadcast story, the NCA report does not mention an increasing threat to the public but only a willingness to use weapons in public.

Second, the BBC Scotland online story uses only the case of a single ‘gangland’ shooting, in a deserted Kinning Park at 11.40pm as evidence of this willingness to kill, in public. Strictly speaking it was in public but the public were not there to witness it.

Third, but not mentioned for context, this was the only murder by shooting recorded in police records for the whole of 2016/17.

Fourth, and also not mentioned as context, if there are only 160 gangs in Scotland yet 4 500 in the UK as a whole, then Scotland has, per capita, far fewer gangs than the rest of the UK. Indeed, Scotland has 8% of the population yet only 3.5% of the gangs. It’s good to see my 8% meme back in use. If you want to see the others, search the blog for 8%.

It’s impossible to know for certain what goes on in their wee journo-minds but are they getting worried that too many Scots have begun to distrust their reporting on crime? See this:

Are Scots less concerned about crime not just because there is less but also because they are learning not to trust media distortion?

Finally, just how desperate are they to stop any of us thinking that things are getting better and connecting that with SNP government? See:

As knife and gun crime rockets across England and Wales and falls in Scotland, Scotland has far more police officers per head of population