In August, the Institute for Fiscal Studies released a report which showed that Scotland is second only to South-East England, out of eleven regions surveyed, in terms of median income with much of the improvement coming under an SNP administration.

Now, from the ONS: Statistical bulletin: Annual Survey of Hours and Earnings: 2017 provisional and 2016 revised results, described as ‘the most detailed and comprehensive source of earnings information in the UK’ we read:

‘The strong rise of earnings in Scotland can be seen in Figure 12, which plots an index of growth from 1997 for the constituent countries of the UK, and London. 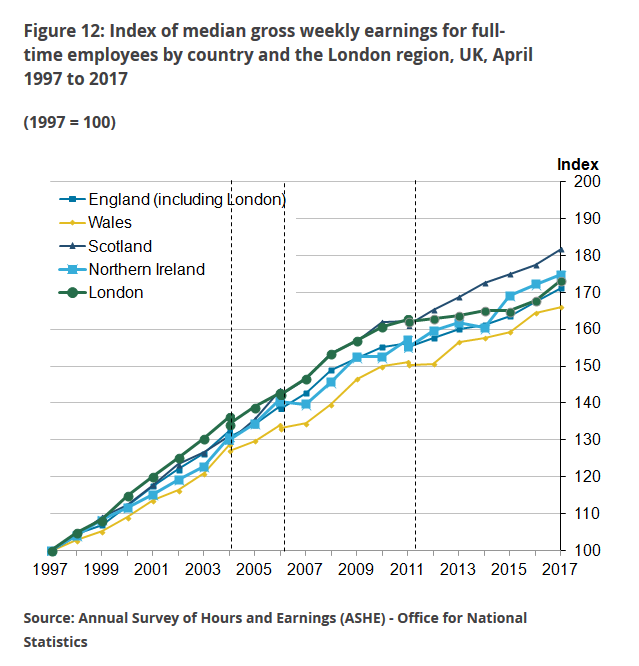 Notice in the above, increases in Scottish earnings begin to accelerate away from the other regions from 2011 in a period of SNP majority administration. During the preceding years of Labour/LibDem coalitions they fail to keep up with those for England and London.  Figure 11 shows Scotland in third place in the UK.

Figure 13 shows Scottish regions in the middle to upper range and none in the lowest range of income. Overall, on the basis of an admittedly broad-brush picture, does this suggest a slightly more equal society? I’ve already reported on the wider benefits of more equal societies at: Would Nicola Sturgeon’s fairer and more equal Scotland be a more productive one too?

More evidence for the Fraser of Angleterre Institute, of Scotland’s ‘fragile economy’?

5 thoughts on “Strong rise in earnings in Scotland to third highest in UK after London and South-east and evidence of a more equal country?”