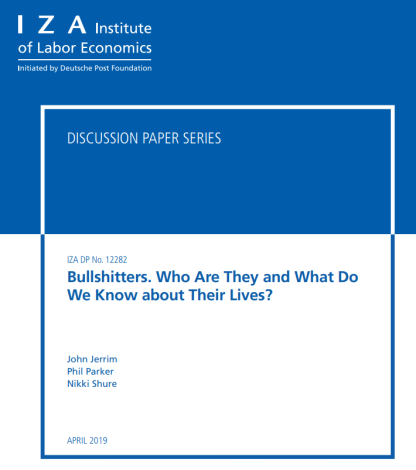 This new large-scale research study based on a sample of more than 40 000 young people across the English-speaking world, has found Scots to be the least bull-shitterish, much less than the English (we knew that) and much, much, less than the Canadians (we didn’t?). The researchers found:

This table and explanation make our proud, yet at the same time modest, position clear:

‘Three broad clusters of countries seem to have emerged. At the top of the rankings are the two North American countries of the United States and Canada. With average scale scores of 0.25 and 0.3, these two countries have significantly higher bullshit scores than any other country. The next three countries (Australia, New Zealand and England) are in the middle of the rankings. Teenagers in these countries exaggerate less about their prowess, on average, than young people in Canada and the United States – by a magnitude equivalent to an effect size of around 0.1. However, they are also significantly bigger bullshitters than young people from Ireland, Northern Ireland and Scotland who form the final group. The average bullshit scale score in these countries ranges between approximately -0.26 (Ireland and Northern Ireland) and -0.43 (Scotland) which is significantly lower than every other country. Moreover, the difference between these countries and North American is sizeable; equivalent to an effect size greater than 0.5. Consequently, despite speaking the same language, and with a closely shared culture and history, we find important variation across Anglophone countries in teenagers’ propensity to bullshit.’ (P13)

Only in Scotland! ‘A review of small country’s approaches to public policy reform in response to economic, demographic and other pressures found that only in Scotland could this ‘golden thread’ be so clearly discerned’

Scientific evidence that Scots tend to be different from the other groups in rUK?

With 1 in 4 living wage employers already in Scotland, the Scottish Government aims to make this a ‘Living Wage Nation’

8% of the UK population and 28% of living wage employers. More evidence that we are different enough to want to run the whole show?